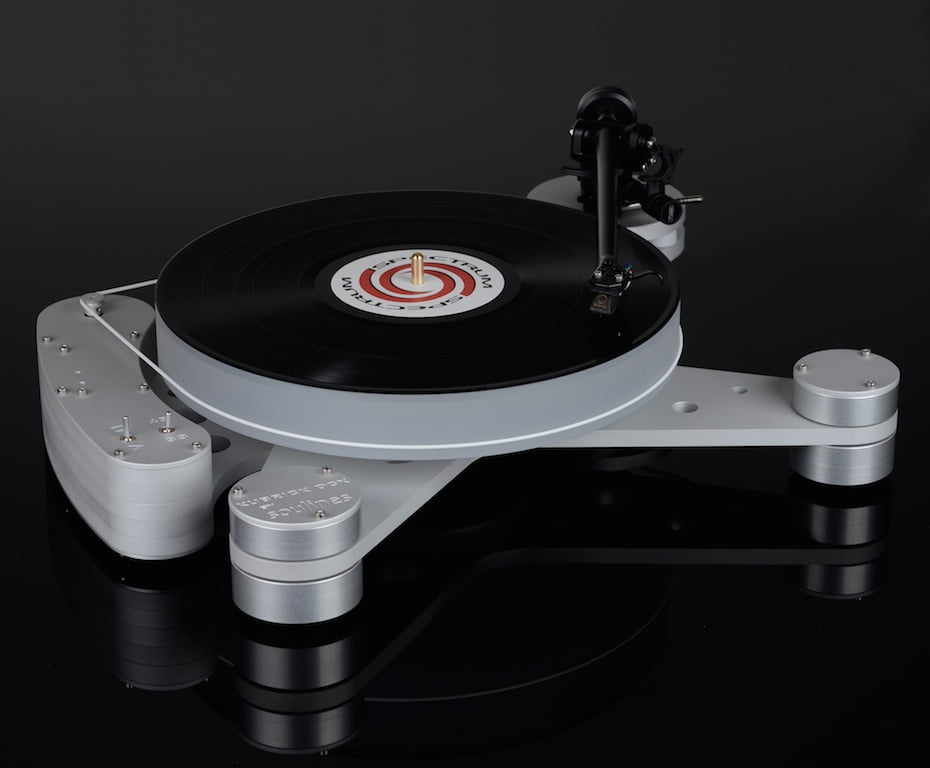 „Tell me, Igor, how come you name a turntable after Dostoyevsky?”

There are some questions that you just ask at the wrong time. This question, for example, I asked the designer and producer of the Soulines turntables at 11 o’clock at night, just a few hours before the Pointe open day started in Budapest that featured the Soulines Kubrick as the analogue source.

The glass in Igor’s hand froze for a moment. It had some home made fruit brandy, rakija, in it, which oozed a luscious smell, and was probably strong enough to be used for medical purposes. To make things worse, the plate in Igor’s other hand also froze. It had Tibor Sindric’s (the man behind Pointe amplifiers) award winning pumpkin pie on it waiting to suffer the first bite. This pumpkin was especially produced to be used in pies, and the pie itself was a sophisticated masterpiece of layers of sweet pumpkin puree and strudel leaves. Indeed, Tibor’s amplifiers are quite good, but, let’s face it, Tibor is the Kondo of all pumpkin pies.

So, Igor froze, he was mute for a few second, and then started to reel off a lengthy answer. Something like he was lying in bed one night, when the idea struck him, and then he consulted with his wife, and that he wanted the name of a writer once his other turntables were named after a French haute couture designer house an ancient deity and a film director, and that he wanted something Russian sounding that was understood worldwide…

This might be the only thing that Igor has no idea about when it comes to his turntables. On all other questions he is ready to deliver accurate, well-formulated and expert answers. Even though turntable-making, to put it mildly, is a playing field for too many swindlers. Once automated CNC machines got relatively cheap, a lot of makeshift turntable manufacturers sprung up all over the world, but the Soulines brand is no newcomer.

Earlier on, Igor functioned as a hifi dealer, selling British brands, mostly the likes of Cyrus, in Yugoslavia. He was doing fine up to the point when he was not doing fine any more. Well, of course, hifi is not a commodity in a country (whatever the name is) where there are several wars are being fought at the same time, and none of them can be won, and then it takes a hell of a lot of time to consolidate after the wars. So, first he had less customers, and then – because of the embargo against Slobodan Milosevic’s regime – he had less goods to sell.

This was the time when Igor started to repair hifi turntables. But parts were also difficult to import, so he had to recycle old turntables – the bearing from this turntable was good, the platter from that one, and the chassis from a third one. Igor’s first turntables were akin to the famous rock’n’roll era limos still surviving in daily use in Havana. And then, later, as things slowly started to turn to the better, Igor’s wife persuaded him to dust off his engineering degree, and design a turntable from scratch, because he had already had enough experience from recycling. No more bombs are falling, he has the necessary tools and equipment, so c’mon. Well, in a nutshell, this is how the Soulines brand came to being.

And now I have this huge box in front of me, and there is a Serbian-made turntable inside. It is the flagship model, a Kubrick, fitted with a Jelco SA750D tonearm. What could it be like? Like a Yugo car that was a piece of Western culture for us, Hungarians, way back then, but now it is not more than a pitiful memory from that past that makes you smile? Or is it something serious, like Pro-Ject, the company that grew out from the Czechoslovakian state-owned Tesla factory plant, thanks to some Austrian investment?

As I am taking the various parts in my hands, staring at the English-language manual, taking off the fixing bolts, I am searching for a hint that would make this turntable look lame. Or crappy. Or Balkanic. Or just not that very perfect. But no, there is no hint like that. If “Made in the UK” or “Made in the USA” were printed on the box, I would believe that. Or Germany, or Japan. The packaging is both creative and secure like an atomic shelter. This Kubrick has travelled all over Europe, it has been carried from show to demo, from demo to show, and still no sign of wear. Mint condition.

Assembly is child’s play. OK, it does not have a sub-plinth on springs that would take a lot of time to adjust, but then Igor did his best to make sure you can play music with the Kubrick a mere 10 minutes after you opened up the box. You just have to put some parts together in the order they are coming out of the package, connect a few wires, and you are done. There is no bearing block needing an oil fill – what you get is a closed unit, designed for eternity plus one day. There are no swinging parts, no screwing parts, nothing like that. Levelling is simply by turning the top of the three feet to level manually. No specific allen key, no spacers, just you and your bare hands.

To make things even better, the easy set-up is not the result of a compromise in workmanship. In the Kubrick’s manual Igor emphasizes that the metal unit, carrying the tone arm, the feet and the motor, is designed with thorough arithmetic: its moment of inertia and center of gravity unite in one point. The drilled holes in the unit are not following the Emmentaler cheese principle either – their exact location is defined by the Golden Ratio and the Fibonacci series, and was perfected after resonance measurements on the prototype. Even though the skeleton of the turntable looks like an all-metal construction, in reality it features a surprisingly large number of cork-and-rubber inserts. This looks like Igor’s favorite material, the record mat on the large acrylic platter is also made of this, which is quite the contrary to my previous experience, but I just gave it a try, once it is a manufacturer proposed option. The power supply also came as a surprise: it is a small AC unit like a phone charger. Igor would not believe it is so important: the platter is so heavy, and the bearing is so sophisticated that a dedicated power supply is just not needed. Well, if he says so…. Speed change and starting the motor is done by the flick of switches – they are located on the far side of the motor unit.

And now a few words about the tone arm. It is a Jelco SA750D. Before actually seeing this one I had the idea that an S-shaped tone arm is necessarily lame. The cheapo plastic Japanese turntables of my childhood all featured S-shaped tone arms, but back then I already strongly believed that straight tone arms are cooler. What’s more, the Hungarian language hifi Bible of the time, the one and only “Hifi Magazin” also stated that “between two points the shortest way is the best one.” To make things worse, this SME-type detachable head shell must be the real poison to hifi, as it is generating unwanted resonances all over. Well, yes. It might be generating those unwanted resonances, but it made me grin when I experienced that changing the cartridge is a whizz – twist off the head shell, replace the cartridge in seconds, twist the shell back on to its place, and with this the cartridge replacement is over.

The Jelco tone arm was a surprise anyway. This is not some British “craftmanship” product, like a Rega or a Helius, this is Japanese precision engineering. The arm lift is perfectly balanced, all the adjustment is made easy and simple, and once it is adjusted, it will stay adjusted. It also looks great. Jelco has been a secret favorite for audiophiles as a tone arm that delivers a lot of music for not so much money. The cartridge must be adjusted properly, of course, but you get a “protractor tool” with the Soulines turntables to make adjustment easy with several geometry options. After that you will have to set up the tracking force, and let there be music.

When I am setting up a turntable it is always vital which record I play first. It’s an important karmic decision, you see. I usually play some Bartók, but not now. I spinned an old Halász Judit recording that I bought for some EUR 0,50 at a garage sale recently. This is cult pop music for children – I have had all kinds of digitalized copies, now it was time to show some analogue record playing to my 4 year old daughter – with music that she enjoys. The cartridge was a Roksan Corus Black, and the music played through a Heed Obelisk Si Mk.II with its own built-in phono preamp card.

Well, we both got struck by surprise. My daughter was surprised that not only palm-size silver discs can play music in a remote controlled box, but big black discs too. She was adamant to learn how to operate a turntable, so in a very short time she became the best turntable operator in her kindergarten group.

But I was surprised as well. What surprised me was how the Soulines Kubrick-Jelco 750-Roksan Corus Black-Heed Si system can play music without any crackling and popping noises. OK, I made a few shots with the Zerostat antistatic gun into the air before playing a record, but I did not clean the records too vigorously – and yet there was this CD-like silence in the music I played. But it was not CD-like in any other respect. When I played music at a low volume, the sound had more energy and flow, and it was more lifelike and friendly than its digital versions. At normal or high volumes even more so. And the sound kept on improving with every hour. The Heed phono card was burning in gradually, and the Corus started to feel at home in the Jelco, and so did the Kubrick on my small wooden cabinet. The Kubrick would have preferred a lightweight shelf instead, as Igor suggests it in the manual, but it was still quite okay. The Kubrick was also tracking without problem when my daughter bumped into the cabinet, dancing, while I was playing a record – even though I was already visualizing a skipping stylus and a broken groove as I saw her shuffling towards the turntable.

In just a week the turntable became a family member. When, on the last day of my testing, I realized that the Kubrick will not be picked up in the morning, only in the afternoon, I found myself unpacking the whole turntable just to play a few more records.

I never really wondered how it sounded. The Kubrick simply levitates above this hifi category. It was not showing off with its sound, it was just serving me. Would I need a Kubrick? Yes, I would. Would I need a better turntable than the Kubrick? Well, if I could get one, why not, but I wouldn’t push that too much. That said, this Serbian made turntable is now in the same category for me as the Audio Innovations AI 300 Mk.I and the Heed Obelisk Si Mk. II. One step further from hifi, one step closer to music.